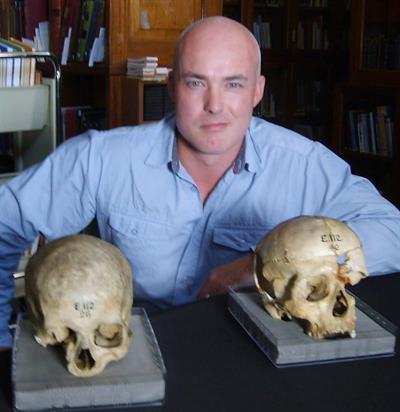 Martin Smith is a Biological Anthropologist with particular interests in prehistoric populations. After completing his PhD and a subsequent three year postdoctoral post at Birmingham University, Martin took up his current post at BU in 2008. His past work has covered a range of periods with particular focus on the Neolithic. His interests centre principally on areas of taphonomy and trauma with relevance to both forensic and archaeological remains.

Martin has strong interests in the study of conflict from prehistoric to modern times. A question that continues to fascinate him is the extent to which war /organized conflict is ‘hard-wired’ in human beings rather than simply a practical response to environmental or social circumstances.

Ethical questions concerning human remains have become particularly prominent in recent years. Martin has repeatedly involved himself in current debates over the retention of skeletal assemblages and maintains the importance of keeping such collections, as once reburied they are effectively gone forever...

It’s good to have personal insights into one’s work and Martin’s GP informs him that he has reached an age where he is developing arthritis in his knees and spine. He looks forward with interest to acquiring further skeletal pathology in years to come…

Martin is currently involved with a range of projects. These include Experimental injuries –investigation of the signatures of various forms of violence related injury using animal bone and synthetic substitutes for human bone. Mechanisms investigated include modern firearms, crossbows and black powder muskets.

Mummified remains -Several small projects examining unusual forms of preservation including the alleged head of a medieval execution victim which was in fact that of an Egyptian mummy and the preserved, tattooed skin of a 19th century French sailor claimed to be a hanged murderer.

The Dead of Prehistoric Dorset- Most famously this involves re-analysis of remains from Wor Barrow -a Neolithic long barrow excavated in 1894 by General Pitt Rivers acknowledged as the first scientific excavation in the world. This English Heritage funded project also includes C14 dating and isotope analysis. These and other burials examined from the same landscape are revealing complex mortuary practices previously not seen in Britain.

The Bioarchaeology of Human Conflict (Co edited with Chris Knüsel, Exeter Univ.) This edited volume constitutes a major contribution to the study of conflict as evidenced by human remains. Contributors include a wide range of international authors many of whom are widely acknowledged as among the top ranking biological anthropologists in the world. as well as young scholars with fresh new ideas. This book is expected to form a major resource in the subject for some years to come...

The Durotriges Project- Excavation of a late iron Age to Roman complex in Dorset, including over 70 human burials which illustrate a range of differing treatments of the body at a time of dramatic cultural transition