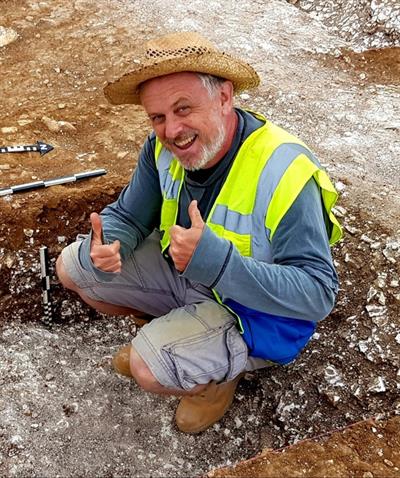 Dr Miles Russell is a senior lecturer in prehistoric and Roman archaeology.

He graduated from the Institute of Archaeology, University College London in 1988 and worked as a field officer for the UCL Field Archaeology Unit and as a project manager for the Oxford Archaeological Unit, joining Bournemouth University in 1993. He has conducted fieldwork across the UK as well as in Germany, Sicily and Russia. He is currently director of Regnum and co-director of the Durotriges Project, both investigating the transition from the Iron Age to Roman period across SE and SW Britain and co-director of Bournemouth University's archaeological field school.

He gained his doctorate, on Neolithic monumental architecture, in 2000 and was elected a Fellow of the Society of Antiquaries of London in 2006.

He has authored fifteen books, including Piltdown Man: the Secret Life of Charles Dawson, Monuments of the British Neolithic: the roots of Architecture, Flint Mines in Neolithic Britain, Arthur and the Kings of Britain, Rough Quarries Rocks and Hills: John Pull and the Neolithic Flint Mines of Sussex, The Early Neolithic Architecture of the South Downs, Prehistoric Sussex, Roman Sussex, Digging Holes in Popular Culture: Archaeology and Science Fiction, Bloodline: the Celtic Kings of Roman Britain, Bignor Roman Villa (with David Rudling) and (with Stuart Laycock) UnRoman Britain: Exposing the Myth of Britannia...

Miles is a regular contributor to television and radio, his most recent appearances being in Digging for Britain, The One Show, Time Team, Time Team: Big Roman Dig, Timewatch, The Seven Ages of Britain, Landscape Mysteries, Witness, Rome's Lost Legion, Operation Stonehenge: what lies beneath, Discovery, A History of Ancient Britain, The Big Spring Clean, Making History, The Sacred Landscapes of Britain, Border Country: the story of Britain's lost Middleland, Secrets from the Sky and Underground Britain.